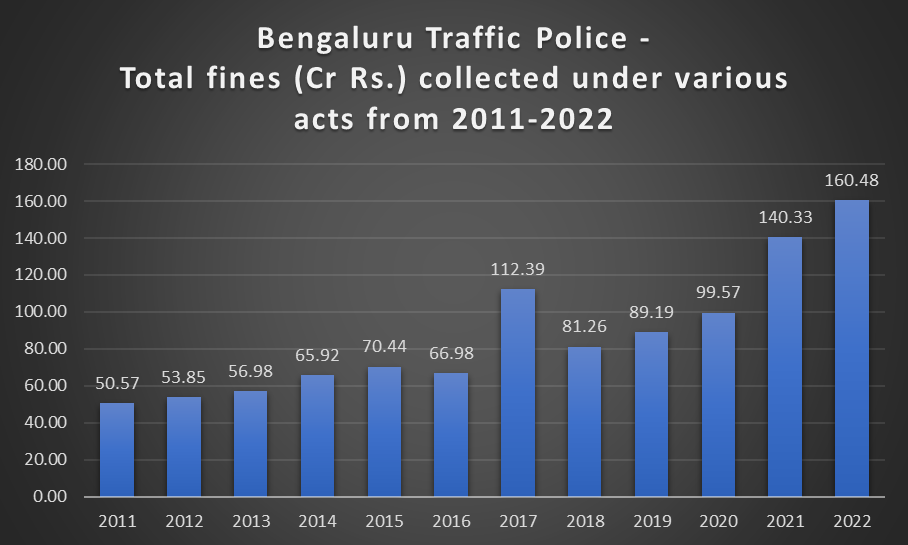 In June 2019, the Government of India raised the penalties for traffic violations. This was a move that was considered to be pending, and was expected to make our roads a lot safer. Surely, steeper fines would make people think a few more times before they jump that red signal?

Three years on, we have data from Bengaluru Traffic Police (BTP) and the results are mixed. To be fair, 2020 and 2021 were pandemic years where repeated lockdowns – total and partial – ensured that a lot less vehicles were plying on the streets.

Record collections for the traffic police

The first impact of increased rates would be on the collections. And this is where the biggest impact is seen – BTP have been seeing record collections since the hike. The collections crossed Rs. 100 Cr in 2021, and this year, they could end up crossing Rs. 200 Cr (the data for 2022 is till the end of Oct 2022).

No change in the number of violations

Did the increase in fines improve safety on the road? This is where things get a bit muddled because of the pandemic. There were a lot fewer vehicles on the streets during 2020 and 2021, and the number of accidents were expected to be lower, and the data bears this out.

Does this mean accidents in Bengaluru are reducing but are more fatal? We will have to wait for a few more years to clearly know what is going on. There is also the factor of poor road conditions which are likely reducing the speed of vehicles, but have reportedly led to a lot of deaths. Clearly there’s a lot that contributes to road safety than just unsafe driving practices.

While increasing the penalties is definitely one answer, increasing the presence of police across the city would also help. Lastly, in the case of Bengaluru, there is a desperate need for better roads and footpaths. No increase in fines or police personnel can offset the potholed, unsafe road conditions that motorists have to deal with, and the lack of footpaths that pedestrians have to endure.